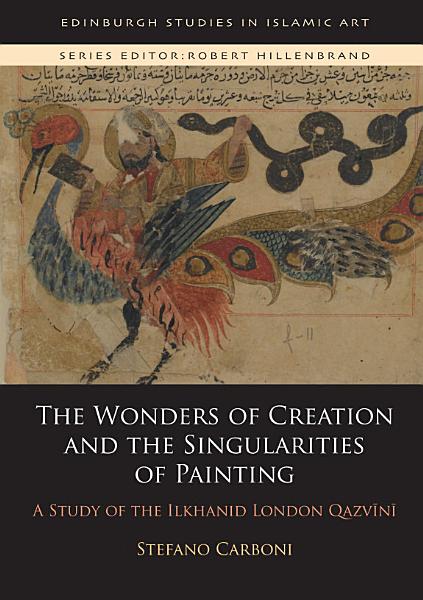 The subject of this book is the so-called London Qazvini, an early 14th-century illustrated Arabic copy of al-Qazvini's The Wonders of Creation and the Oddities of Existing Things, which was acquired by the British Library in 1983 (Or. 14140). As is commonly the case for copies of this text, the London Qazvini is lavishly illustrated, with 368 extant paintings out of the estimated original ca. 520.Its large format, ambitious illustrative cycle and the fine quality of many of the illustrations suggest that the atelier where it was produced must have been well-established and able to attract craftsmen from different parts of the Ilkhanid area. It also suggests that its patron was wealthy and curious about scientific, encyclopedic and cajA 'ib literature, and keen to experiment with the illustration of new texts like this work, which had been composed by the author only two or three decades earlier. The only centre that was capable of gathering such artistic influences ranging from Anatolia to Mesopotamia appears to have been Mosul.The London QazvA nA is an important newly surfaced document for the study of early illustrated Arabic copies of this text, representing the second earliest known surviving manuscript, as well as for the study of Ilkhanid painting. In a single and unique manuscript are gathered earlier Mesopotamian painting traditions, North Jaziran-Seljuq elements, Anatolian inspirations, the latest changes brought about after the advent of the Mongols, and a number of illustrations of extraordinary subjects which escape a proper classification.

Wonders of Creation and the Singularities of Painting

Authors: Carboni Stefano Carboni
Categories: Art
Type: BOOK - Published: 2020-03-31 - Publisher: Edinburgh University Press
The subject of this book is the so-called London Qazvini, an early 14th-century illustrated Arabic copy of al-Qazvini's The Wonders of Creation and the Oddities of Existing Things, which was acquired by the British Library in 1983 (Or. 14140). As is commonly the case for copies of this text, the

The Wonders of Creation and the Singularities of Ilkhanid Painting

Authors: Stefano Carboni
Categories: Illumination of books and manuscripts, Iranian
Type: BOOK - Published: 1992 - Publisher:
Books about The Wonders of Creation and the Singularities of Ilkhanid Painting

The Legacy of Genghis Khan

Glass of the Sultans

Authors: Stefano Carboni, David Whitehouse, Robert H. Brill, Corning Museum of Glass, William Gudenrath, Metropolitan Museum of Art (New York, N.Y.)
Categories: Art
Type: BOOK - Published: 2001 - Publisher: Metropolitan Museum of Art
This catalogue accompanies an exhibition that brings together more than 150 glass objects representing twelve centuries of Islamic glassmaking. Included are the principal types of pre-industrial glass from Egypt, the Middle East, and India in a comprehensive array of shapes, colors, and techniques such as glassblowing, the use of molds,

Authors: Elizabeth Morrison
Categories: Art
Type: BOOK - Published: 2019-06-04 - Publisher: Getty Publications
"This publication is issued on the occasion of the exhibition Book of Beasts: The Bestiary in the Medieval World, on view at the J. Paul Getty Museum at the Getty Center, Los Angeles, from May 14 to August 18, 2019."

Dome of the Rock and its Umayyad Mosaic Inscriptions

Authors: Marcus Milwright
Categories: Religion
Type: BOOK - Published: 2019-04-01 - Publisher: Edinburgh University Press
The Dome of the Rock is a shrine located on the Temple Mount in the Old City of Jerusalem. When was it built? What meanings was it meant to convey to viewers at the time of its construction? These are questions that have preoccupied historians of Islamic art and architecture,

Making of the Artist in Late Timurid Painting

Authors: Lamia Balafrej
Categories: Art
Type: BOOK - Published: 2019-04-01 - Publisher: Edinburgh University Press
In the absence of a tradition of self-portraiture, how could artists signal their presence within a painting? Centred on late Timurid manuscript painting (ca. 1470-1500), this book reveals that pictures could function as the painter's delegate, charged with the task of centring and defining artistic work, even as they did