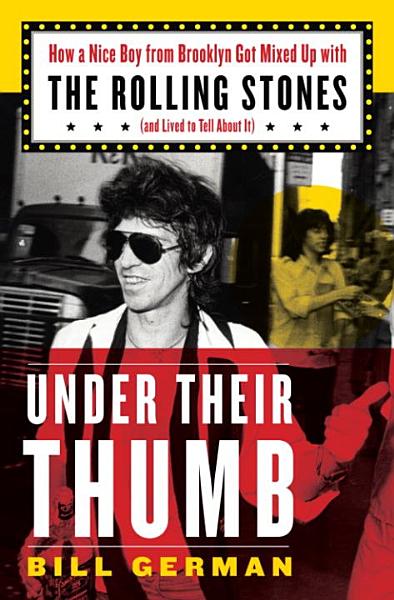 Under Their Thumb is an up-close and extremely personal dispatch from the amazing, exclusive world of the Rolling Stones, by someone who was lucky enough to live it–and sober enough to remember it all. “The epic tale of an obsessive teenager who launched a Rolling Stones fanzine and spent the next two decades capturing the band’s whirlwind metamorphosis from behind the scenes. . . . First-rate, firsthand account of the world’s greatest rock ’n’ roll band, and a disenchanted chronicle of its increasingly crass commercialization.”—Kirkus Reviews As a teenager, Bill German knew exactly what he wanted to do with his life: chronicle the career and adventures of his favorite rock band, the Rolling Stones. And in 1978, on his sixteenth birthday, he set out to make his dream a reality. Feverishly typed in his Brooklyn bedroom, and surreptitiously printed in his high school’s mimeograph room German’s Stones-only newsletter, Beggars Banquet, was born. His teachers discouraged it, his parents dismissed it as a phase, and his disco-loving classmates preferred the Bee Gees, but, for German, this primitive, pre-Internet fanzine was a labor of love. And a fateful encounter with his idols on the streets of New York soon proved his efforts weren’t in vain. Impressed with Beggars Banquet, the Stones gave the ’zine instant cred on the rock scene by singing its praises–and by inviting German to hang with the band. At first a fish out of water in the company of rock royalty, German found himself spilling orange juice on a priceless rug in Mick Jagger’s house and getting pegged as a narc by pals of Keith Richards and Ron Wood. But before long he became a familiar fixture in the inner sanctum, not just reporting Stones stories but living them. He was a player in the Mick-versus-Keith feud and was an eyewitness to Keith’s midlife crisis and Ron’s overindulgences. He even had a reluctant role in covering up Mick’s peccadilloes. “In the span of a few months,” German recalls, “I’d gone from wanting to know everything about my favorite rock stars to knowing too much.” In this warts-and-all book, which includes many never-before-seen photographs, German takes us to the Stones’ homes, recording sessions, and concerts around the world. He charts the band’s rocky path from the unthinkable depths of a near breakup to the obscenely lucrative heights of their blockbuster tours. And ultimately, German reveals why his childhood dream come true became a passion he finally had to part with.

Authors: Bill German
Categories: Biography & Autobiography
Type: BOOK - Published: 2009-02-24 - Publisher: Villard
Under Their Thumb is an up-close and extremely personal dispatch from the amazing, exclusive world of the Rolling Stones, by someone who was lucky enough to live it–and sober enough to remember it all. “The epic tale of an obsessive teenager who launched a Rolling Stones fanzine and spent the

Christmas Under the Stars

Authors: Karen Swan
Categories: Fiction
Type: BOOK - Published: 2016-11-03 - Publisher: Pan Macmillan
A gripping, festive novel, Christmas Under the Stars by Karen Swan reveals the devastating power of secrets. Worlds apart. A love without limit. In the snow-topped mountains of the Canadian Rockies, Meg and Mitch are living their dream. Just weeks away from their wedding, they work and play with Tuck

Don't Sit Under the Apple Tree

Elephants Under the Rug

Authors: Daisy Nelson
Categories: Biography & Autobiography
Type: BOOK - Published: 2015-06-18 - Publisher: Author House
This book represents an actual lifelong journal of sorts, with pieces collected from the early 1970's- 2015. It contains a mosaic of short stories, memoirs, poems and journal entries. Ms. Nelson touches on what life was like growing up in a small town, where the characters treated her cruelly at

Girls of the Forest

Authors: Henry Handel Richardson
Categories: Fiction
Type: BOOK - Published: 2012-09-26 - Publisher: Text Publishing
Henry Handel Richardson's debut, published in London in 1908, is set in the music scene of turn-of-the-century Leipzig, a cosmopolitan centre for the arts drawing students from around the world—among them Maurice Guest, a young Englishman, who falls helplessly in love with an Australian woman, Louise Dufrayer.

Authors: Debashish Sen
Categories: Psychology
Type: BOOK - Published: 2019-12-10 - Publisher: Cambridge Scholars Publishing
This book is a study of psychological realism in select works from nineteenth-century fiction, namely Fathers and Sons, Anna Karenina, The Mill on the Floss, and Jane Eyre. It shows how psychoanalytic theories may be applied to illuminate various aspects of the psyches of characters in these texts. The book

Authors: Henry D. Jr. Schlinger, Alan Poling
Categories: Psychology
Type: BOOK - Published: 2013-11-21 - Publisher: Springer Science & Business Media
We humans are faced with an interesting problem: That which we think we un derstand the most-our own behavior-we probably understand the least. On the eve of a new millennium. the planet is beset by a host of problems that are. for the most part. caused by human behavior. Ironically.