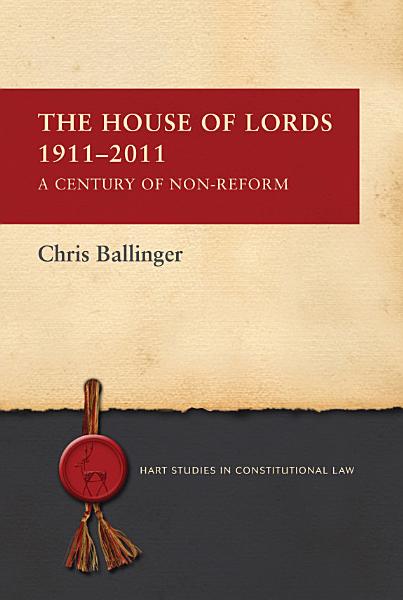 House of Lords reform is often characterised as unfinished business: a riddle that has been left unanswered since 1911. But rarely can an unanswered riddle have had so many answers offered, even though few have been accepted; indeed, when Viscount Cave was invited in the mid-1920s to lead a Cabinet committee on Lords reform, he complained of finding 'the ground covered by an embarrassing mass of proposals'.That embarrassing mass increased throughout the twentieth century. Much ink has been spilled on what should be done with the upper House of Parliament; much less ink has been expended on why reform has been so difficult to achieve. This book analyses in detail the principal attempts to reform the House of Lords. Starting with the Parliament Act of 1911 the book examines the century of non-reform that followed, drawing upon substantial archival sources, many of which have been under-utilised until now. These sources challenge many of the existing understandings of the history of House of Lords reform and the reasons for success or failure of reform attempts. The book begins by arguing against the popular idea that the 1911 Act was intended by its supporters to be a temporary measure. 'No one – peers included – should be allowed to pronounce about the future of the House of Lords without reading Chris Ballinger's authoritative, shrewd and readable account about reform attempts over the past century. He punctures several widely-held myths and claims in the current debate.' Rt Hon Peter Riddell CBE Director, Institute for Government and former Hansard Society chair 'This is at once an impeccably researched academic study, and a thoroughly readable account loaded with lessons for today's would-be Lords reformers.' Lord (David) Lipsey

Authors: Chris Ballinger
Categories: Law
Type: BOOK - Published: 2014-08-07 - Publisher: Bloomsbury Publishing
House of Lords reform is often characterised as unfinished business: a riddle that has been left unanswered since 1911. But rarely can an unanswered riddle have had so many answers offered, even though few have been accepted; indeed, when Viscount Cave was invited in the mid-1920s to lead a Cabinet

Reform of the House of Lords

Authors: Philip Norton
Categories: Political Science
Type: BOOK - Published: 2017-06-29 - Publisher: Manchester University Press
This book is the only one of its kind, providing a clear and exhaustive analysis of the different approaches to the future of Britain’s second chamber.

Authors: Michael Zander
Categories: Law
Type: BOOK - Published: 2020-06-25 - Publisher: Bloomsbury Publishing
As a critical, in-depth analysis of the law-making process, this book has no equal. It deals with all the stages and forms of law-making: - the preparation of legislation; - its passage through Parliament; - statutory interpretation; - the operation of the rules of precedent in judicial decision-making; - the

Parliament and the Law

Authors: Alexander Horne, Gavin Drewry
Categories: Law
Type: BOOK - Published: 2018-02-22 - Publisher: Bloomsbury Publishing
Parliament and the Law (Second Edition) is an edited collection of essays, supported by the UK's Study of Parliament Group, including contributions by leading constitutional lawyers, political scientists and parliamentary officials. It provides a wide-ranging overview of the ways in which the law applies to, and impacts upon, the UK

Authors: Roger Mortimore, Andrew Blick
Categories: Political Science
Type: BOOK - Published: 2018-07-31 - Publisher: Springer
This book is the most comprehensive single volume reference work available for British political facts. Covering the period from 1900 to the present, it is the latest edition in a series previously edited by David Butler and various collaborators. This new edition updates the contents to the immediate post-European Union

The Contemporary House of Lords

Authors: Meg Russell
Categories: Law
Type: BOOK - Published: 2013-07-11 - Publisher: OUP Oxford
As the second chamber of the Westminster parliament, the House of Lords has a central position in British politics. But it is far less well-studied and well understood than the House of Commons. This is in part because of constant expectations that it is about to be reformed - but

The regulation of standards in British public life

Authors: David Hine, Gillian Peele
Categories: Political Science
Type: BOOK - Published: 2016-03-02 - Publisher: Manchester University Press
This is an analysis of the revolution of the last two decades that has built an extensive new regulatory apparatus governing British public ethics. The book sets the new machinery in the wider institutional framework of British government. Its main purpose is to understand the dilemmas of regulatory design that

Authors: David Brown, Robert Crowcroft, Gordon Pentland
Categories: History
Type: BOOK - Published: 2018-03-29 - Publisher: Oxford University Press
The two centuries after 1800 witnessed a series of sweeping changes in the way in which Britain was governed, the duties of the state, and its role in the wider world. Powerful processes - from the development of democracy, the changing nature of the social contract, war, and economic dislocation