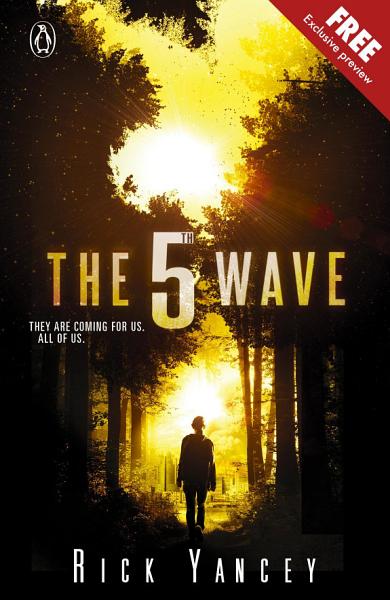 Free exclusive preview of The 5th Wave. The Passage meets The Hunger Games in this gripping new series from Carnegie-shortlisted Rick Yancey. After the 1st wave, only darkness remains. After the 2nd, only the lucky escape. And after the 3rd, only the unlucky survive. After the 4th wave, only one rule applies: trust no one. Now, it's the dawn of the 5th wave. On a lonely stretch of highway, Cassie runs from Them. The beings who only look human, who roam the countryside killing anyone they see. Who have scattered Earth's last survivors. To stay alone is to stay alive, until Cassie meets Evan Walker. Beguiling and mysterious, Evan may be her only hope for rescuing her brother and even saving herself. Now Cassie must choose: between trust and despair, between defiance and surrender, between life and death. To give up or to get up. Cassie Sullivan gets up. Begin Cassie's journey with free sample chapters from The Fifth Wave www.The5thWaveIsComing.com About the author: Rick Yancey (www.rickyancey.com) is the author of several adult novels and the memoir Confessions of a Tax Collector. His first young-adult novel, The Extraordinary Adventures of Alfred Kropp, was a finalist for the Carnegie Medal. In 2010, his novel, The Monstrumologist, received Michael L. Printz Honor, and the sequel, The Curse of the Wendigo, was a finalist for the Los Angeles Times Book Prize. Praise for The 5th Wave: 'This is DAMN and WOW territory. Quite simply, one of the best books I've read in years.' Melissa Marr, New York Times bestselling author. 'Breathtakingly fast-paced and original, The 5th Wave is a reading tsunami that grabs hold and won't let go.' Melissa De La Cruz, New York Times bestselling author of the Blue Bloods series. 'An epic sci-fi adventure about a terrifying alien invasion. You'll read it in one sitting' Bookseller 'Yancey's heartfelt, violent, paranoid epic, filled with big heroics and bigger surprises, is part War of the Worlds, part Starship Troopers, part Invasion of the Body Snatchers, and part The Stand . . . a sure thing for reviewers and readers alike.' Booklist (starred review) 'A gripping SF trilogy about an Earth decimated by an alien invasion... the question of what it means to be human is at the forefront' Publishers Weekly

Authors: Rick Yancey
Categories: Juvenile Fiction
Type: BOOK - Published: 2013-04-08 - Publisher: Penguin UK
Free exclusive preview of The 5th Wave. The Passage meets The Hunger Games in this gripping new series from Carnegie-shortlisted Rick Yancey. After the 1st wave, only darkness remains. After the 2nd, only the lucky escape. And after the 3rd, only the unlucky survive. After the 4th wave, only one

Authors: RD king
Categories: Business & Economics
Type: BOOK - Published: - Publisher: 大賢者外語
Profits That Lie Hidden From Social Media For Network Marketer! Let’s face it – We all know the fact that social media is the hottest engagement channels that everyone is using. Many business online or offline have started to promote and sell their products over social media platforms but not

Confessions of a Tax Collector

Authors: Richard Yancey
Categories: Biography & Autobiography
Type: BOOK - Published: 2009-03-17 - Publisher: Zondervan
Twelve years ago, Richard Yancey answered a blind ad in the newspaper offering a salary higher than what he’d made over the three previous years combined. It turned out that the job was for the Internal Revenue Service -- the most hated and feared organization in the federal government. So

Authors: Rick Yancey
Categories: Young Adult Fiction
Type: BOOK - Published: 2017-05-23 - Publisher: Penguin
The highly-anticipated finale to the New York Times bestselling 5th Wave series. The enemy is Other. The enemy is us. They're down here, they're up there, they're nowhere. They want the Earth, they want us to have it. They came to wipe us out, they came to save us. But

The Extraordinary Adventures of Alfred Kropp

Authors: Rick Yancey
Categories: Juvenile Fiction
Type: BOOK - Published: 2011-07-01 - Publisher: A&C Black
Alfred Kropp was just trying to survive high school when his guardian uncle gets him roped into a suspicious get-rich-quick scheme that changes his life forever: stealing Excalibur - the legendary sword of King Arthur. But after Alfred unwittingly delivers the sword into the hands of the enemy, he sets

Authors: Morris R. Shechtman
Categories: Business & Economics
Type: BOOK - Published: 1998 - Publisher: Newstar Press
Welcome to the communication-intensive Fifth Wave. We are in a new business and entrepreneurial age where achievement is more than just graduating from a good school and obtaining a set of skills. In an era where information travels and technology spreads almost instantaneously, the next frontier is about us, not

Authors: Paul Peter Urone
Categories: Science
Type: BOOK - Published: 1998-01-01 - Publisher: Brooks/Cole Publishing Company
This text blends traditional introductory physics topics with an emphasis on human applications and an expanded coverage of modern physics topics, such as the existence of atoms and the conversion of mass into energy. Topical coverage is combined with the author's lively, conversational writing style, innovative features, the direct and

Authors: Rick Yancey
Categories: Young Adult Fiction
Type: BOOK - Published: 2018-11-06 - Publisher: G.P. Putnam's Sons Books for Young Readers
"Remarkable, not-to-be-missed-under-any-circumstances."--Entertainment Weekly (Grade A) The Passage meets Ender's Game in an epic new series from award-winning author Rick Yancey. After the 1st wave, only darkness remains. After the 2nd, only the lucky escape. And after the 3rd, only the unlucky survive. After the 4th wave, only one rule applies: