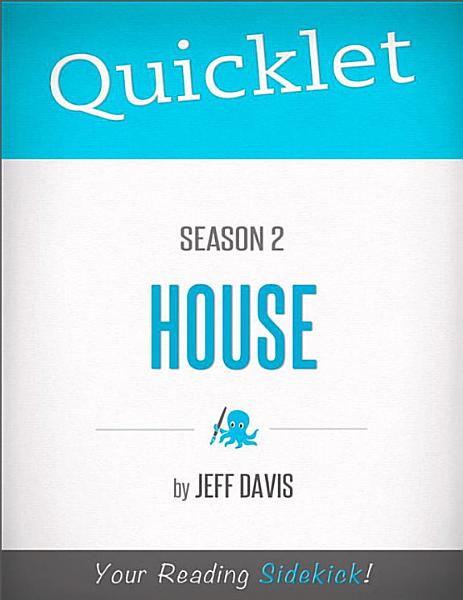 ABOUT THE BOOK House M.D. has become one of the most successful medical dramas of all time; this is no small feat, considering the medical drama genre has been around since the inception of the TV series. Medical dramas tend to have several of the same elements, which can be packaged and arranged in different ways but remain fundamentally the same. Medical dramas have sick patients, of course, so people in peril is part of the formula. They have technology, or, more specifically, they have medical technology. The shows are full of disease names, other jargon, and high-tech machines that make viewers think what is on the screen is new and vibrant. And they have ratiocination, that is, they have that quality of the detective story that keeps everyone interested, the application of reason and investigative methodology to solve a difficult problem. MEET THE AUTHOR Jeff Davis is a life long educator with a Ph.D. in English Studies who has taught at both the high school and university levels. He is also an artist and an amateur anthropologist who is a proponent of First Art, that art which our ancient ancestors practiced some 30,000 years ago and even earlier. His most recent book, The First-Generation Student Experience, expanded the college student-affairs field describing the challenges of contemporary nontraditional students. Related to his interest in evolutionary biology, he is currently working on a writing pedagogy book that argues that motivation is the most important dimension of the creative process, even more important than skill and native ability. EXCERPT FROM THE BOOK House M.D. has been running for eight seasons, since 2004, and each season has its own special flavor in terms of character and plot development. One of the main themes of Season Two is Houses attitude toward medical ethics. House obviously thinks about the ethics of his actions, but his actions often reflect questionable conclusions. Strangely, some people regard House as ethical to a fault. These people think House gets into trouble because he represents a true, pure ethical character while everyone around him takes the easy way out. This behavior can make him seem brave to some people, but what if he is just a cold, antisocial individual who doesnt care about other peoples feelings? For example, it might be full disclosure to tell a terminal patient who will die in two days that his wife has been cheating on him, but this does inflict unnecessary emotional injury to the patient as well. So what is ethical? Anyway, Season Two shows House acting brashly in many touchy, ethical situations; although he sometimes appears to get pleasure out of delivering bad news to people, he also seems to want to do the right thing most of the time. CHAPTER OUTLINE Quicklet on House Season 2 (TV Show) + Introduction + Producer and Directors + Overall Summary: Season Two + Episode Summaries: Season Two + ...and much more House Season 2 (TV Show)

Authors: Jeff Davis
Categories: Study Aids
Type: BOOK - Published: 2012-04-04 - Publisher: Hyperink Inc
ABOUT THE BOOK House M.D. has become one of the most successful medical dramas of all time; this is no small feat, considering the medical drama genre has been around since the inception of the TV series. Medical dramas tend to have several of the same elements, which can be

Authors: Christina St-Jean
Categories: Study Aids
Type: BOOK - Published: 2012-07-30 - Publisher: Hyperink Inc
ABOUT THE BOOK House M.D. is a medical-themed television show that started back in 2004, shortly after the production team of David Shore, Paul Attanasio and Katie Jacobs pitched the idea to Fox Broadcasting. While the medical procedural itself was hailed as something like CSI: Crime Scene Investigation, the character

Authors: Evelyn Dumonte
Categories: Study Aids
Type: BOOK - Published: 2012-03-14 - Publisher: Hyperink Inc
ABOUT THE BOOK While the second season produced some of the best Community episodes to date, including the Emmy-winning Christmas episode, it also felt the most uneven season to date (which could explain the steep decline in ratings from first season). Whereas most shows put their best foot forward with

Authors: Nicki Bixter
Categories: Study Aids
Type: BOOK - Published: 2012-07-30 - Publisher: Hyperink Inc
ABOUT THE BOOK It is the season of the witch in Bon Temps. The characters of True Blood have dealt with anti-vampire fanatics, a sexed-crazed maenad, werewolves, and have even seen a bit of faerie power. What is left on our horror-genre list of supernatural beings? Witches. Next up, Godzilla?

Quicklet on How I Met Your Mother Season 4 (TV Show)

Authors: Hayley Igarashi
Categories: Study Aids
Type: BOOK - Published: 2012-07-30 - Publisher: Hyperink Inc
ABOUT THE BOOK Robin: “It was weird. Weird. Weird. Weird. Weird. W-I-E-R-D. Weird.” How I Met Your Mother has a misleading title. Sure, the premise focuses on a father telling his kids how he first met their mother, but it’s really just about life — Ted finding his future mate

Authors: Lauren Taylor Shute
Categories: Study Aids
Type: BOOK - Published: 2012-03-14 - Publisher: Hyperink Inc
ABOUT THE BOOK Chances are, you heard about Mad Men before you watched it. Seemingly out of the blue, drinking during the day was cool again, fashion from the 60s was back in stores, and a handsome man in a suit was hosting Saturday Night Live. Enough people likely expressed

Authors: Jonathan Kaufman Nathan
Categories: Study Aids
Type: BOOK - Published: 2012-07-30 - Publisher: Hyperink Inc
ABOUT THE BOOK “I like to describe Portland as a city with a lot of self-esteem, filled with people with a lot of self-doubt. Portland is a really kind place, with all kinds of people who will go to tyrannical lengths to show you how kind they are, to the

Authors: Sarah Cassie
Categories: Performing Arts
Type: BOOK - Published: 2012-05-22 - Publisher: Hyperink Inc
Glee had caused a fuss before the show even aired. From the first cryptic commercials to the success of the first episodes, potential future audiences wondered if a show about misfits singing in a show choir could "make it." The buzz was loud, expectations were high. In the end, however,

Authors: David Michael Beaudrie
Categories: Study Aids
Type: BOOK - Published: 2012-03-14 - Publisher: Hyperink Inc
ABOUT THE BOOK Dexter broke new ground for Showtime when it first premiered in 2006. Rival network HBO had long been acclaimed for its dramatic and comedic series such as The Sopranos and Entourage and Dexter proved that Showtime could deliver its own unique brand of drama that would captivate

The Hate U Give