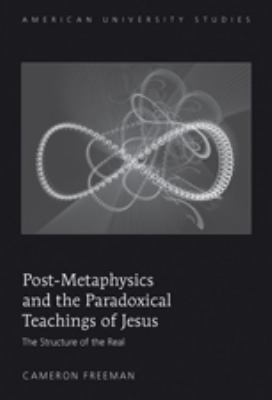 Post-Metaphysics and the Paradoxical Teachings of Jesus: The Structure of the Real uncovers the authentic voice-print of Jesus' teachings on the Kingdom of God and thereby outlines a new approach to theological language after the 'end of metaphysics'. By showing that the paradoxical 'deep structure' of Jesus' most radical teachings survives the Death of God and the deconstruction of metaphysics in twentieth-century continental philosophy, this book aims to reconstruct the original teachings of Jesus in a way that can begin a new conversation on what it means to be a Christian in a post-Christian world, while drawing on a remarkable range of supporting material, including John D. Caputo's award-winning theological appropriation of Derrida's deconstruction, the pioneering work of John Dominic Crossan on the parables of Jesus, and the novel insights of Jesus Seminar scholars Robert Funk and Branden Scott. Beginning with questions surrounding the 'end of metaphysics' in Martin Heidegger's existentialist philosophy and moving on to the ethico-political dimensions of Derrida's work, this volume examines Nicholas of Cusa's notion of God as the coincidence of opposites, Buddhist genius Nagarjuna's dialectic of Emptiness, and the Hindu concept of non-duality in raising the possibility of a post-metaphysical theology. Following an original unpacking of the parables of Jesus, the central thesis is woven together with reference to Moltmann's important work on the crucified God, as well as Kierkegaard and the Absolute Paradox, negative/mystical theology in the Christian tradition, twentieth-century Japanese philosopher Nishida Kitaro, and aspects of Nietzsche, Thomas Aquinas, Plato, Aristotle, Meister Eckhart, G. K. Chesterton, Slavoj Zizek, and Ken Wilber.

Post-metaphysics and the Paradoxical Teachings of Jesus

Authors: Cameron Freeman
Categories: Religion
Type: BOOK - Published: 2010 - Publisher: Peter Lang
Post-Metaphysics and the Paradoxical Teachings of Jesus: The Structure of the Real uncovers the authentic voice-print of Jesus' teachings on the Kingdom of God and thereby outlines a new approach to theological language after the 'end of metaphysics'. By showing that the paradoxical 'deep structure' of Jesus' most radical teachings

The Structure of the Real

The Originality of Jesus

Authors: Per Bilde
Categories: Fiction
Type: BOOK - Published: 2013-08-14 - Publisher: Vandenhoeck & Ruprecht
For the first time in the history of modern Jesus research Per Bilde aims his scholarly interest at the originality of the historical Jesus. Accordingly he examines the historical Jesus and 14 contemporary Jewish Palestinian figures who, in one or more respects, can be argued to be comparable to Jesus.

Authors: Eric E Hall, Hartmut von Sass
Categories: Religion
Type: BOOK - Published: 2014-12-25 - Publisher: ISD LLC
'Groundless Gods: The Theological Prospects of Post-Metaphysical Thought' deals with possible interpretations of an emerging interest in contemporary theology: postmetaphysical theology. This book attempts to openly come to grips, not only with whatmetaphysics and postmetaphysics imply, but also with what it could mean to do or not do theology from

A Theology of Nonsense

Authors: Josephine Gabelman
Categories: Religion
Type: BOOK - Published: 2017-10-26 - Publisher: ISD LLC
There is within all theological utterances something of the ridiculous, perhaps more so in Christianity, given its proclivity for the paradoxical and the childlike. Few theologians are willing to discuss how consent to the Christian doctrine often requires a faith that goes beyond reason. There seems to be a fear

The Logic of Intersubjectivity

Authors: Darren M. Slade
Categories: Religion
Type: BOOK - Published: 2020-08-27 - Publisher: Wipf and Stock Publishers
To survey harsh criticisms against Brian Douglas McLaren (1956‒), readers gain the inaccurate impression that he is a heretical relativist who denies objective truth and logic. While McLaren's inflammatory and provocative writing style is partly to blame, this study also suspects that his critics base much of their analyses on

The Image of Christ in Russian Literature

Authors: John Givens
Categories: Religion
Type: BOOK - Published: 2018-05-29 - Publisher: Northern Illinois University Press
Vladimir Nabokov complained about the number of Dostoevsky's characters "sinning their way to Jesus." In truth, Christ is an elusive figure not only in Dostoevsky's novels, but in Russian literature as a whole. The rise of the historical critical method of biblical criticism in the nineteenth century and the growth