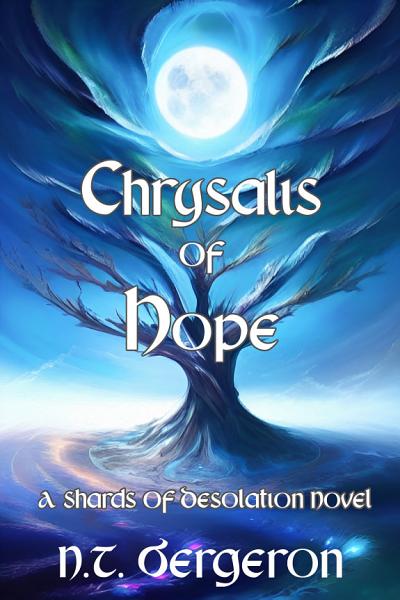 Getting in was the easy part. Tagan had only to follow his hearts desire; to rescue Braulor. Leading those true to his quest, they storm straight into the dark realm of Ta Oandimn where the swarming hordes of evil souls who reside there are just about to make Braulor a permanent resident. Elated at having found his brother, they only need to escape and they can finsh the their journey to find the Amber Eye. But it doesn't take long for Tagan to realize that getting out of Ta Oandimn is going to be much trickier than it seems. With the chairs at the table shifting, Grawton finds himself in the place he always longed to be. For Grawton, the position of power he had dreamt of for so long he couldn't remember, has fallen into his lap. But power corrupts and Grawton is no saint. With a little taste under his belt, he wants more power. One can't stop when they want it all and from his perch in the shadowy realm it seems the world is there for his taking. Stripped of everything he knew, the Shadowkeeper intends to be the spanner in the works. He has no choice in the matter. By his own hand came his undoing and by his own hand will come his salvation. Stuck in the awkward position of being prisoner instead of warden, the Shadowkeeper knows his options are limited. Almost as limited as his hope. But where there is hope, there is a chance and the Shadowkeeper knows he must act with the precision of a high wire walker if he hopes to ascend to power once again. With everybody looking for answers and all the cards on the table, the answers are still far and few between. It's dawning on everyone that recent events only closed the latest chapter. There are still many pages to be written before the book is complete. How it was going to end was anybody's guess. Circumstances set in motion far back in the reaches of time have given each a destiny to fulfill. Now each must follow the path they are on, blinded to what lies ahead. But for every plot, for every machination, there is always a flip side. A dynamic element that can come out of nowhere and foil even the best laid plans. There is one contingency out there that no one planned on. One event that none of the major player could have have seen coming and nobody could have fathomed the decisive blow to everything it would deliver. The nuclear level strike that will turn everything on its head. And She is coming...

Authors: N.T. Bergeron
Categories:
Type: BOOK - Published: 2018-06-12 - Publisher: NT Bergeron
Getting in was the easy part. Tagan had only to follow his hearts desire; to rescue Braulor. Leading those true to his quest, they storm straight into the dark realm of Ta Oandimn where the swarming hordes of evil souls who reside there are just about to make Braulor a

Authors: Onur Yildirim
Categories: Business & Economics
Type: BOOK - Published: 2007-05-07 - Publisher: Routledge
This study presents a comprehensive, balanced and factually grounded narrative of the Turco-Greek Exchange of Populations as a historic event that has been the subject of much distortion in the historiographical traditions of nationalist lore in Greece and Turkey, as well as in scholarly publications of various sorts elsewhere over

Authors: N. T. Bergeron
Categories: Business & Economics
Type: BOOK - Published: 2014-06-27 - Publisher: N.T. Bergeron
While still a young boy Tagan confesses to his parents that he can see into the beautiful world of Quanna Eresse. Their over the top reaction convinces Tagan that something is wrong with him and he tries to suppress his ability. Forget about it altogether. But Tagan comes to learn

Ms. Ladybug and Mr. Honeybee: A Love Story at the End of Time

Authors: Pauline Panagiotou-Schneider, Guy R. McPherson
Categories: Juvenile Fiction
Type: BOOK - Published: 2015-07-29 - Publisher: America Star Books
Ms. Ladybug and Mr. Honeybee: A Love Story at the End of Time tells the story of a ladybug and a honeybee who find each other after losing their entire families to the poisonous fogs the humans are spraying. The unlikely duo pursues a safe haven from the poisonous fog

Authors: Pauline Panagiotou-Schneider, Guy R. McPherson
Categories: Man-woman relationships
Type: BOOK - Published: 2009 - Publisher: Eternal Press
Luzan Kiowa has lived in the canyon all her life, but it's never felt right. Leaving the man she loves behind, she journeys with a group of searchers to find her real home. She takes along with her the yellow stone given to her by her Moma Kiowa, whose ancestors