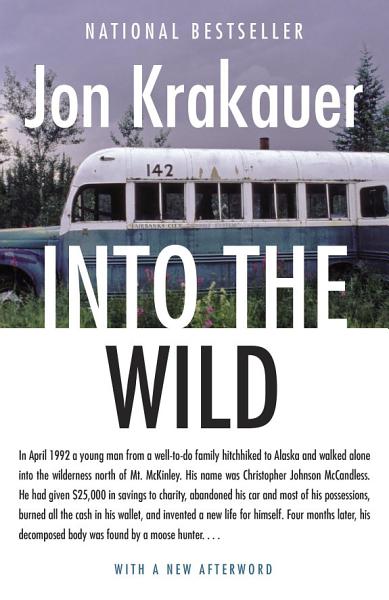 In April 1992 a young man from a well-to-do family hitchhiked to Alaska and walked alone into the wilderness north of Mt. McKinley. His name was Christopher Johnson McCandless. He had given $25,000 in savings to charity, abandoned his car and most of his possessions, burned all the cash in his wallet, and invented a new life for himself. Four months later, his decomposed body was found by a moose hunter. How McCandless came to die is the unforgettable story of Into the Wild. Immediately after graduating from college in 1991, McCandless had roamed through the West and Southwest on a vision quest like those made by his heroes Jack London and John Muir. In the Mojave Desert he abandoned his car, stripped it of its license plates, and burned all of his cash. He would give himself a new name, Alexander Supertramp, and , unencumbered by money and belongings, he would be free to wallow in the raw, unfiltered experiences that nature presented. Craving a blank spot on the map, McCandless simply threw the maps away. Leaving behind his desperate parents and sister, he vanished into the wild. Jon Krakauer constructs a clarifying prism through which he reassembles the disquieting facts of McCandless's short life. Admitting an interst that borders on obsession, he searches for the clues to the dries and desires that propelled McCandless. Digging deeply, he takes an inherently compelling mystery and unravels the larger riddles it holds: the profound pull of the American wilderness on our imagination; the allure of high-risk activities to young men of a certain cast of mind; the complex, charged bond between fathers and sons. When McCandless's innocent mistakes turn out to be irreversible and fatal, he becomes the stuff of tabloid headlines and is dismissed for his naiveté, pretensions, and hubris. He is said to have had a death wish but wanting to die is a very different thing from being compelled to look over the edge. Krakauer brings McCandless's uncompromising pilgrimage out of the shadows, and the peril, adversity , and renunciation sought by this enigmatic young man are illuminated with a rare understanding--and not an ounce of sentimentality. Mesmerizing, heartbreaking, Into the Wild is a tour de force. The power and luminosity of Jon Krakauer's stoytelling blaze through every page. From the Trade Paperback edition.

Into the Wild Blue Yonder

Authors: Allan T. Stein
Categories: History
Type: BOOK - Published: 2005-02-16 - Publisher: Texas A&M University Press
Allan T. Stein idolized his uncle, a pilot in the Great War. So in 1943, in the midst of the Second World War, he left Texas A&M University for Lackland Air Field to learn to fly. By the time he retired in 1969, Stein had flown everything from BT-13s and

Cameras into the Wild

Authors: Palle B. Petterson
Categories: Performing Arts
Type: BOOK - Published: 2011-08-12 - Publisher: McFarland
The cinematographers and directors who shot film in wilderness areas at the turn of the 19th century are some of the unsung heroes of documentary film-making. Apart from severe weather conditions, these men and women struggled with heavy and cumbersome equipment in some of the most unforgiving locales on the

Authors: Beth Ciotta
Categories: Fiction
Type: BOOK - Published: 2010-09-01 - Publisher: HQN Books
When River Kane's fiancé abandons her at the altar for being too conventional, she's heartbroken. But everything changes when her estranged archaeologist father sends her his journal—filled with cryptic maps and a note indicating he's in mortal danger. Worried, River faces her greatest fears and flies to the Amazon to

Authors: Sarah Beth Durst
Categories: Juvenile Fiction
Type: BOOK - Published: 2008-05-29 - Publisher: Penguin
When the magical world of the Wild takes over Julie’s town, she must venture deep into the heart of the fairy tale to outsmart wicked witches, feisty giants, and super cute princes in the ultimate quest to save her family. But can an ordinary girl defeat the happily-ever-after?

Daniel Boone: Into the Wild

Authors: Jennifer Kroll
Categories: Juvenile Nonfiction
Type: BOOK - Published: 2010-09-01 - Publisher: Teacher Created Materials
Daniel Boone is often known for a coonskin cap, but more than that, he was one of America's greatest explorers! Readers will learn about Daniel's adventurous life as he hunted and trapped animals, created a Wilderness Road, and rescued his daughter from Shawnee Indians! This fascinating book has been translated

Into the Wild Nerd Yonder

Authors: Julie Halpern
Categories: Young Adult Fiction
Type: BOOK - Published: 2009-09-29 - Publisher: Feiwel & Friends
It's Jessie's sophomore year of high school. A self-professed "mathelete," she isn't sure where she belongs. Her two best friends have transformed themselves into punks and one of them is going after her longtime crush. Her beloved older brother will soon leave for college (and in the meantime has shaved

Indigo Flight: Into the Wild

Authors: Kimberly Vogel
Categories: Fiction
Type: BOOK - Published: 2010-03 - Publisher: Lulu.com
A girl without a past is struggling to build her future. It's difficult though, as every day further back than three months is lost to her. Signs are taped over everything she owns with notes to help her know what they are. At least in her home she is safe.

CliffsNotes on Krakauer's Into the Wild

Authors: Adam Sexton
Categories: Literary Criticism
Type: BOOK - Published: 2011-01-06 - Publisher: Houghton Mifflin Harcourt
The CliffsNotes study guide on Krakauer's Into the Wild supplements the original literary work, giving you background information about the author, an introduction to the work, a graphical character map, critical commentaries, expanded glossaries, and a comprehensive index, all for you to use as an educational tool that will allow