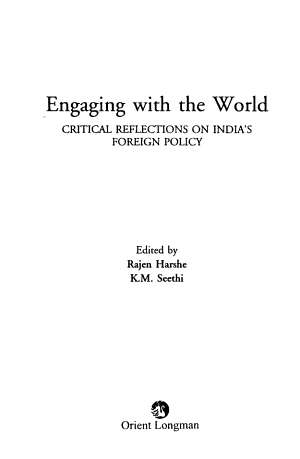 This volume represents one of the rare and comprehensive exercises in critically analysing diverse aspects of India s engagement with the world after the cold war. It is primarily written for the students and scholars in international relations who are trying to grapple with different aspects of India s foreign policy. It contains 24 papers by some of the prominent academicians and diplomats on on major areas as well as some of the dominent concerns of India s foreign policy. It situates India s role in the context of the Third World. The essays included in this volume deal with a vast spectrum of subjects and issues, encompassing the political, ideological, security and economic aspects of India s foreign policy. They are related to reforms and liberalisation, regional cooperation, human, national and energy security, and the overall strategy of India s foreign policy since independence. In the process, they unveil the complexities of relations between India and major powers like the United States, Russia and China, and shed fresh insights on India s ties with important regions including West Asia, Southeast Asia, Africa and the Indian Ocean rim. India s ties with its South Asian neighbours, particularly Pakistan, are scrutinised with the idea of exploring the possibilities of promoting South Asian regional cooperation. The policy analysis and insights offered in the volume would be useful to students, scholars and policy-makers studying India s engagement with the world.