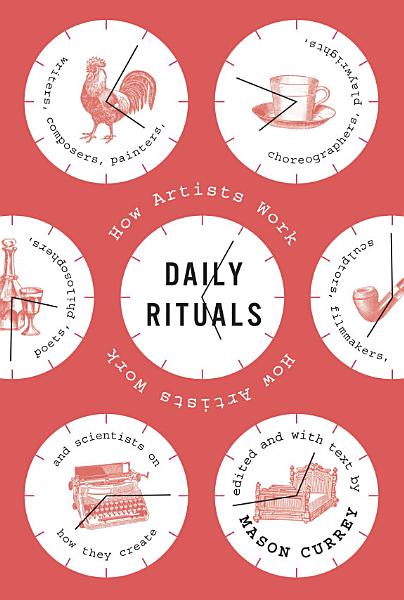 Franz Kafka, frustrated with his living quarters and day job, wrote in a letter to Felice Bauer in 1912, “time is short, my strength is limited, the office is a horror, the apartment is noisy, and if a pleasant, straightforward life is not possible then one must try to wriggle through by subtle maneuvers.” Kafka is one of 161 inspired—and inspiring—minds, among them, novelists, poets, playwrights, painters, philosophers, scientists, and mathematicians, who describe how they subtly maneuver the many (self-inflicted) obstacles and (self-imposed) daily rituals to get done the work they love to do, whether by waking early or staying up late; whether by self-medicating with doughnuts or bathing, drinking vast quantities of coffee, or taking long daily walks. Thomas Wolfe wrote standing up in the kitchen, the top of the refrigerator as his desk, dreamily fondling his “male configurations”. . . Jean-Paul Sartre chewed on Corydrane tablets (a mix of amphetamine and aspirin), ingesting ten times the recommended dose each day . . . Descartes liked to linger in bed, his mind wandering in sleep through woods, gardens, and enchanted palaces where he experienced “every pleasure imaginable.” Here are: Anthony Trollope, who demanded of himself that each morning he write three thousand words (250 words every fifteen minutes for three hours) before going off to his job at the postal service, which he kept for thirty-three years during the writing of more than two dozen books . . . Karl Marx . . . Woody Allen . . . Agatha Christie . . . George Balanchine, who did most of his work while ironing . . . Leo Tolstoy . . . Charles Dickens . . . Pablo Picasso . . . George Gershwin, who, said his brother Ira, worked for twelve hours a day from late morning to midnight, composing at the piano in pajamas, bathrobe, and slippers . . . Here also are the daily rituals of Charles Darwin, Andy Warhol, John Updike, Twyla Tharp, Benjamin Franklin, William Faulkner, Jane Austen, Anne Rice, and Igor Stravinsky (he was never able to compose unless he was sure no one could hear him and, when blocked, stood on his head to “clear the brain”).

Authors: Mason Currey
Categories: Reference
Type: BOOK - Published: 2013-04-23 - Publisher: Knopf
Franz Kafka, frustrated with his living quarters and day job, wrote in a letter to Felice Bauer in 1912, “time is short, my strength is limited, the office is a horror, the apartment is noisy, and if a pleasant, straightforward life is not possible then one must try to wriggle

Authors: Mason Currey
Categories: Literary Collections
Type: BOOK - Published: 2019-03-05 - Publisher: Knopf
More of Mason Currey's irresistible Daily Rituals, this time exploring the daily obstacles and rituals of women who are artists--painters, composers, sculptors, scientists, filmmakers, and performers. We see how these brilliant minds get to work, the choices they have to make: rebuffing convention, stealing (or secreting away) time from the

The Little Book of Daily Rituals

Authors: Vicki Vrint
Categories: Self-Help
Type: BOOK - Published: 2020-01-09 - Publisher: Summersdale Publishers LTD - ROW
Discover the restorative wonders of daily rituals A ritual is an act of self-care that’s carried out mindfully, and with reverence: a gratitude ritual to relive the high points of your day; a ritual for self-expression to free unexpressed emotions; a candle ritual to focus your mind on peace. With

Authors: Phoebe Garnsworthy
Categories: Fiction
Type: BOOK - Published: 2018-04-20 - Publisher:
Would you like to attract more abundance? More love, more happiness and more peace? It is possible and available for you right now, if you believe it to be true.Positive energy vibrates at a high frequency. If you focus on radiating this frequency first, you will naturally attract the equivalent

Authors: Shiva Rose
Categories: Health & Fitness
Type: BOOK - Published: 2018-04-03 - Publisher: Artisan Books
A decade ago, after suffering from life-threatening autoimmune disorders, Hollywood actress Shiva Rose set out to discover a more holistic way to natural health and beauty. Growing her own organic herbs and flowers; mixing creams, lotions, and tonics; and following Ayurvedic practices and creating mindful rituals, she has not only