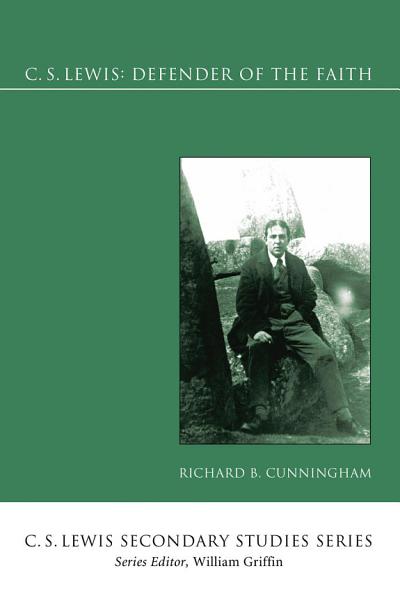 C. S. Lewis was a man of many talents: a literary critic, a Medieval and Renaissance scholar, a stimulating lecturer, a prolific writer, a perceptive critic of Western civilization, and the author of highly acclaimed children's books. But he is perhaps best known as the unorthodox defender of orthodoxy, the most popular and influential Christian apologist of his time. His literary skill, his brilliant and wide-ranging mind, and his multi-layered imagination made him a master of communication and gave him insight into what should be communicated. This study of his work inquires what it is about his faith, his view of the world, and his apologetic methods that strikes such a responsive chord in the hearts of unchurched people; and it shows how he made the old ideas of traditional Christianity glimmer and glow with simplicity and attractiveness. Lewis took up his apologetic pen because he felt that most theologians are talking jargon. Any fool can write learned language, he said. The vernacular is the real test. If you can't turn your faith into it, then either you don't understand it or you don't believe it. His books are unusual because he believed that reason is the organ of truth; imagination is the organ of meaning. In the infernal correspondence of Screwtape, the haunting myths of his trilogy of space fiction, and the allegories of the Narnia books, he tries to bring the reader suddenly face to face with transcendental values and existential questions. Richard Cunningham evaluates the different kinds of literature Lewis uses as apologetic instruments, studies the devices and techniques of debate he employs to communicate his faith to unbelievers, and deduces some pertinent principles to help others define and understand the Christian faith.

Authors: Richard B. Cunningham
Categories: Religion
Type: BOOK - Published: 2008-06-02 - Publisher: Wipf and Stock Publishers
C. S. Lewis was a man of many talents: a literary critic, a Medieval and Renaissance scholar, a stimulating lecturer, a prolific writer, a perceptive critic of Western civilization, and the author of highly acclaimed children's books. But he is perhaps best known as the unorthodox defender of orthodoxy, the

CS Lewis Defender of the Faith

The Image of Man in C. S. Lewis

Authors: William Luther White
Categories: Religion
Type: BOOK - Published: 2009-01-12 - Publisher: Wipf and Stock Publishers
It is in the role of remythologizer that C. S. Lewis has been most misunderstood, and it is there that his importance lies. His was the poetic intensity that saw all hell swallowed by a butterfly with no harm done. Of his creation are allegories and myth that express very

Lord of the Elves and Eldils

Authors: Richard L. Purtill
Categories: Philosophy
Type: BOOK - Published: 2006 - Publisher: Ignatius Press
A fascinating look at the fantasy and philosophy of C.S. Lewis and J.R.R Tolkien. The two men were friends and fellow professors at Oxford, renowned Christian thinkers who both "found it necessary to create for the purposes of their fiction other worlds--not utopias or dystopias, but different worlds." "The great

C. S. Lewis and His Circle

Authors: Roger White, Judith Wolfe, Brendan Wolfe
Categories: Religion
Type: BOOK - Published: 2015-06-01 - Publisher: Oxford University Press
For over thirty years, the Oxford C. S. Lewis Society has met weekly in the medieval colleges of the University of Oxford. During that time, it has hosted as speakers nearly all those still living who were associated with the Inklings-the Oxford literary circle led by C. S. Lewis--as well

C.S. Lewis—On the Christ of a Religious Economy, 3.2

Authors: P. H. Brazier
Categories: Religion
Type: BOOK - Published: 2014-01-16 - Publisher: Wipf and Stock Publishers
C. S. Lewis--On the Christ of a Religious Economy. II. Knowing Salvation, opens with a discussion of the Anscombe-Lewis debate (the theological issues relating to revelation and reason, Christ the Logos). This leads into Lewis on the Church (the body of Christ) and his understanding of religion: how is salvation