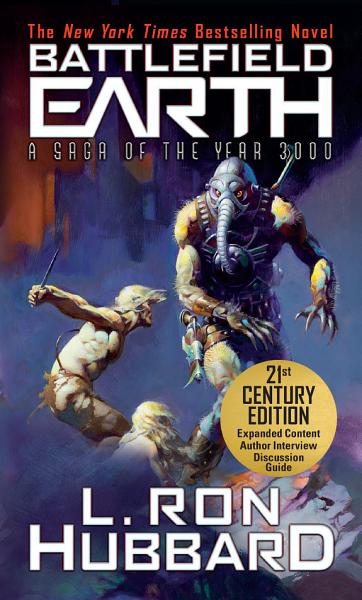 If you liked Dune, Atlantis Gene and Star Wars—you will love the book Battlefield Earth! In the year A.D. 3000, Earth is a dystopian wasteland, plundered of its natural resources by alien conquerors known as Psychlos. Fewer than thirty-five thousand humans survive in a handful of communities scattered across the face of a post-apocalyptic Earth. From the ashes of humanity rises a young hero, Jonnie Goodboy Tyler. Setting off on an initial quest to discover a hidden evil, Jonnie unlocks the mystery of humanity’s demise and unearths a crucial weakness in their oppressors. Spreading the seeds of revolt, Jonnie and a small band of survivors pit their quest for freedom in an all-out rebellion that erupts across the continents of Earth and the cosmic sprawl of the Psychlo empire. For the fate of the Galaxy lies on the Battlefield of Earth. “Over 1,000 pages of thrills, spills, vicious aliens and noble humans. I found Battlefield Earth un-put-downable.” —Neil Gaiman “Battlefield Earth is a terrific story! The carefully underplayed comedy I found it delicious. A masterpiece.” —Robert A. Heinlein “Pulse-pounding mile-a-minute sci-fi action adventure that does not stop. It is a masterpiece of popular adventure science fiction.” —Brandon Sanderson “Space opera that hits the right notes. It's provocative, exhilarating and genuinely enjoyable.” —SCIFI.COM “Like the Harry Potter series, itʼs got concepts like good vs. evil, the noble savage and the heroʼs journey—and people go crazy over it!” —Dr. David Powers, Educator Awards and Accolades: Top 100 science fiction books Top three of the best 100 English language novels of the 20th century by the Random House Modern Library Readers Poll US Golden Scroll and Saturn Awards Tetradramma d'Oro Award Gutenberg Award Read the novel that changed the shape of science fiction * Over 4,000,000 copies sold * Translated in 25 languages * 21st Century edition with expanded content: author's never-before-published handwritten notes & an exclusive author interview An engaging read for STEM learning The imaginative diversity of the novel's characters and alien races, its military artifacts and striking technologies and mathematics make it the perfect motivation for STEM learning. “Want to get your kid excited about STEM? Battlefield Earth will give you the talking points, in fact, theyʼll already be talking about it.” —S.G. Educator Accelerated Reader level 5.8, students earn 62 points Lexile 780 Discussion guide available for book clubs and educators.

Authors: L. Ron Hubbard
Categories: Fiction
Type: BOOK - Published: 2016-06-06 - Publisher: Galaxy Press LLC
If you liked Dune, Atlantis Gene and Star Wars—you will love the book Battlefield Earth! In the year A.D. 3000, Earth is a dystopian wasteland, plundered of its natural resources by alien conquerors known as Psychlos. Fewer than thirty-five thousand humans survive in a handful of communities scattered across the

Authors: Warren LeRoi Johns
Categories: Fiction
Type: BOOK - Published: 2017-08-14 - Publisher:
Cosmic War: The Moment Time Began is a full-color, scrupulously annotated historic drama, correlating science, history and Biblical resources in exploring our origin, purpose and destiny in an eternity of time and an infinity of space. The concept that life created itself, accidentally, from non-living matter, along with the inadequacy

Authors: L Ron Hubbard
Categories: Motion picture plays
Type: BOOK - Published: 2017-12-04 - Publisher:
The Limited Edition Battlefield Earth leatherbound is called Windsplitter, celebrating Jonnie Goodboy Tyler's fastest horse and steadfast companion, who is always there for him whatever the odds. Together they go head-to-head against the formidable Psychlo aliens who have overrun Earth and put Man on the endangered species list. The ideal

Authors: Christopher Tookey
Categories: Performing Arts
Type: BOOK - Published: 2015-03-28 - Publisher: Troubador Publishing Ltd
Tookey’s Turkeys identifies the worst 144 movies of the last 25 years. Christopher Tookey has seen at least 10,000 films. For eight years, he was TV and then film critic for theSunday Telegraph. For twenty years, he was sole film critic for the Daily Mail and the world’s most popular

Authors: L. Ron Hubbard
Categories: Fiction
Type: BOOK - Published: 2003-06-15 - Publisher: Galaxy Press LLC
What on Earth are the Voltarians up to now? Fast cars ... and fast women. Start your engines! Voltarian Royal Officer Jettero Heller is putting the pedal to the metal—and the action is about to shift into high gear. Behind the wheel of his souped-up Caddy, Heller’s in a race

Authors: L. Ron Hubbard
Categories: Fiction
Type: BOOK - Published: 2005-06-15 - Publisher: Galaxy Press LLC
Earthlings: Beware! Do you know who your enemies are? Your neighbor? Your boss? Your butcher? Your wife? Only the Voltarians know for sure. They’ve successfully infiltrated our little world—and it may never be the same. They walk among us. They work among us. And they’re making themselves right at home,