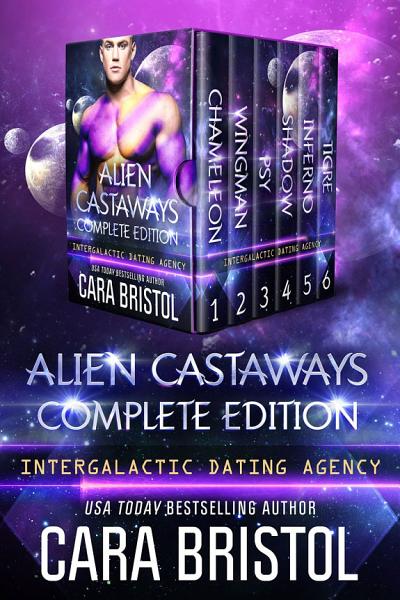 Six genetically engineered aliens fleeing the destruction of their world get a second chance for life and love on planet Earth. This boxed set contains all six books of the series. Chameleon: Alien Castaways 1 (Intergalactic Dating Agency) When his ship tumbles out of the sky and lands on Earth, Chameleon never expects to fall for a human woman. Unfortunately, he can’t stay. His mistake led to the devastation of an entire planet, and now the survivors are depending on him to get them to safety. He must repair his ship and leave before the Xeno Consortium finds him and Earth becomes endangered, too. But oh, he wishes he could stay with Kevanne forever… Wingman: Alien Castaways 2 (Intergalactic Dating Agency) Traumatized by the death of his family and the destruction of his planet, Wingman comes to Earth in search of a haven and the solitude to nurse his emotional wounds. When a chance decision foils a kidnapping, he’s drawn into the life of a young widow and her daughter. But when dangers from Delia’s past resurface, he’ll have to conquer his demons to save her and her child. Psy: Alien Castaways 3 (Intergalactic Dating Agency) Soon after encountering the beautiful, shy Cassie, Psy realizes she’s his genmate. It doesn’t matter she can’t talk—he loves her as she is. But as their telepathic connection deepens, he begins to suspect her inability to speak is more than a congenital happenstance. Something far more sinister appears to be keeping her a virtual prisoner. He’s certain his psychic powers can unlock the secrets in Cassie’s mind. But will revealing the truth liberate her…or destroy their bond? Shadow: Alien Castaways 4 (Intergalactic Dating Agency) Shadow’s genetics have been programmed with a self-destruct sequence. If he doesn’t bond with a genmate, he will fade from existence. He’s hoping Mandy, the town’s clairvoyant, can help him by finding his match. But what is an alien to do when attraction leads to love, and every indication shows Mandy is not his genmate? Will Shadow decide love is worth dying for? Inferno: Alien Castaways 5 (Intergalactic Dating Agency) Extraterrestrial Inferno has searched in vain for the one woman his Luciferan DNA has chosen for him. When he locates Geneva in the church of a small Idaho town, the last thing he expects is for her to throw him out as though he was Satan himself. How can he prove to the beautiful skeptic they are meant for each other when he can’t even convince her he’s an alien? Tigre: Alien Castaways 6 (Intergalactic Dating Agency) Tigre, a Saberian from planet ’Topia, instantly recognizes Kat as his genmate, so he doesn’t hesitate to let her know. But by the disdainful curl of her lips, the stunning human lets him know she finds him lacking as a mate. If she doesn’t want him—then he doesn’t want her. But when the feral fever strikes, more than tempers get hot. These books also are available in two partial boxed sets: Alien Castaways Volume One and Alien Castaways Volume Two.

Authors: Cara Bristol
Categories: Fiction
Type: BOOK - Published: 2021-11-01 - Publisher: Cara Bristol
Six genetically engineered aliens fleeing the destruction of their world get a second chance for life and love on planet Earth. This boxed set contains all six books of the series. Chameleon: Alien Castaways 1 (Intergalactic Dating Agency) When his ship tumbles out of the sky and lands on Earth,

Authors: Cara Bristol
Categories: Fiction
Type: BOOK - Published: 2020-10-27 - Publisher: Cara Bristol
Locked in a prison of silence… Cassie Steward has not spoken a word. Ever. A congenital birth defect robbed her of the ability to speak. Craving independence from her overprotective, well-meaning mother, she gets a job at the antique store in their small town. Yet, the fact remains she’ll always

Authors: Cara Bristol
Categories: Fiction
Type: BOOK - Published: 2020-11-13 - Publisher: Cara Bristol
On a world that doesn’t even have a word for love, a gender caste system keeps women in slavery, relegated to breeding. Can love triumph? Breeder (Book 1) She was only meant to be the Alpha Commander's breeder...but she became his everything. Alpha Commander Dak purchases Omra because he needs

Authors: Cara Bristol
Categories: Fiction
Type: BOOK - Published: 2020-08-03 - Publisher: Cara Bristol
The Men of Mettle boxed set contains seven cyborg romance books. The cyborgs of the clandestine military unit Cyber Operations are the only force preventing galactic domination by a terrorist mastermind. These Men of Mettle are saving the galaxy (and the girl) one mission at a time. Cyborg Protector (Men

Authors: Cara Bristol
Categories: Fiction
Type: BOOK - Published: 2020-09-16 - Publisher: Cara Bristol
When you wish upon a falling star, er, UFO… Young widow Kevanne Girardi catches sight of a meteorite streaking across the sky and wishes for a good handyman to help make her rundown lavender farm a big success. Instead, she gets a shapeshifting alien who apparently has never seen a

Authors: Charlotte Brontë
Categories: Fiction
Type: BOOK - Published: 2017-10-16 - Publisher: e-artnow
"Jane Eyre" follows the emotions and experiences of its character, including her growth to adulthood, and her love for Mr. Rochester. The focus is on the gradual unfolding of Jane's moral and spiritual sensibility and all the events are coloured by a heightened intensity. The novel contains elements of social

Authors: Jana Wood
Categories: Travel
Type: BOOK - Published: 2019-04-02 - Publisher: The Countryman Press
A complete update to the one and only true guide to Arkansas In this, the second edition to the only comprehensive travel guide to Arkansas, Jana Wood covers all the attractions well- known and little- known in “the Natural State.” A land rich in history and nature, Arkansas is home