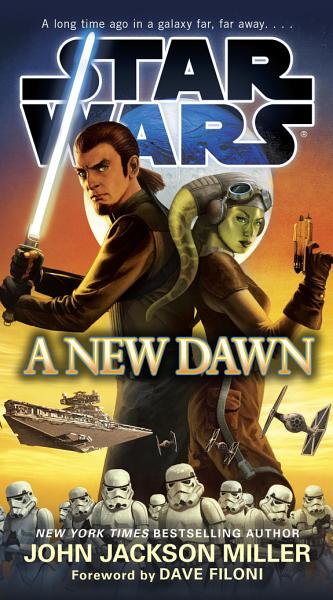 A long time ago in a galaxy far, far away. . . . “The war is over. The Separatists have been defeated, and the Jedi rebellion has been foiled. We stand on the threshold of a new beginning.”—Emperor Palpatine For a thousand generations, the Jedi Knights brought peace and order to the Galactic Republic, aided by their connection to the mystical energy field known as the Force. But they were betrayed—and the entire galaxy has paid the price. It is the Age of the Empire. Now Emperor Palpatine, once Chancellor of the Republic and secretly a Sith follower of the dark side of the Force, has brought his own peace and order to the galaxy. Peace through brutal repression, and order through increasing control of his subjects’ lives. But even as the Emperor tightens his iron grip, others have begun to question his means and motives. And still others, whose lives were destroyed by Palpatine’s machinations, lay scattered about the galaxy like unexploded bombs, waiting to go off. . . . The first Star Wars novel created in collaboration with the Lucasfilm Story Group, Star Wars: A New Dawn is set during the legendary “Dark Times” between Episodes III and IV and tells the story of how two of the lead characters from the animated series Star Wars Rebels first came to cross paths. Featuring a foreword by Dave Filoni. Praise for A New Dawn “A New Dawn is a fine start to the new Expanded Universe. [John Jackson] Miller steps confidently into the unexplored territory and owns it; he’s crafted a story with pacing and dialogue that feels like classic Star Wars.”—Nerdist “An entertaining adventure . . . with a cast of heroes that mixes laughter with intriguing depths of character. . . . John Jackson Miller packs in plenty of action and surprises.”—Roqoo Depot “A confidently told story that gives fans a lot of reason to be hopeful about what’s to come as we move into this new phase of Star Wars . . . The book certainly got me even more excited for Rebels and to see more of Kanan and Hera’s adventures. We’re also introduced to other characters I would love to see again at some point, whether on Rebels, in another book or, who knows, in live-action at some point.”—IGN “A New Dawn delivers a classic Star Wars experience that fans of all ages will be able to enjoy. It is extremely well-written, with an incredibly diverse cast too. Miller’s prose can easily suck readers in, and leave them speechless when 100 pages have flown by in the blink of an eye.”—Far Far Away Radio “A New Dawn brings us into this new dawn of storytelling with energy, excitement, and characters that have become instantly ensconced into the Star Wars vernacular, and the results will satisfy Star Wars fans of many different palates.”—Coffee with Kenobi “A New Dawn is a well-written novel full of intrigue and twists and turns that does an excellent job of letting Star Wars fans get to know Kanan and Hera.”—Tosche Station “A New Dawn finds an era never before written about in the Star Wars universe—the years prior to the original movie, Episode IV—in robust good health. The narrative takes place on two worlds and a handful of ships in between them, but as with the best of all Star Wars moments, hints at hidden depths beyond.”—Mashable

Authors: John Jackson Miller
Categories: Fiction
Type: BOOK - Published: 2014-09-02 - Publisher: Del Rey
A long time ago in a galaxy far, far away. . . . “The war is over. The Separatists have been defeated, and the Jedi rebellion has been foiled. We stand on the threshold of a new beginning.”—Emperor Palpatine For a thousand generations, the Jedi Knights brought peace and order

Authors: John Jackson Miller
Categories: Fiction
Type: BOOK - Published: 2014-09-25 - Publisher: Random House
A long time ago in a galaxy far, far away. . . . “The war is over. The Separatists have been defeated, and the Jedi rebellion has been foiled. We stand on the threshold of a new beginning.”—Emperor Palpatine, Star Wars: Episode III: Revenge of the Sith For a thousand

Authors: Katherine Tyers
Categories: Fiction
Type: BOOK - Published: 2012-09-30 - Publisher: Random House
In the aftermath of one tragedy, will a young Jedi’s search for redemption lead to yet another? There is no place else to cannel the flood of refugees fleeing the murderous Yuuzhan Vong but the overcrowded planet Duro poisoned by centuries of technological excess. Fortunately a deal struck: In exchange

Authors: Olusegun Obasanjo
Categories: Africa
Type: BOOK - Published: 2001 - Publisher:
The editor of this volume has compiled transcriptions of the Nigerian President's key speeches delivered between May 2000 and May 2001. There are some sixty speeches from a variety of political and state occasions, international summits and conferences, official openings and inaugurations. Reflecting Nigeria's prominence and diverse involvement in sub-regional,

Rogue One: A Star Wars Story

Authors: Alexander Freed
Categories: Fiction
Type: BOOK - Published: 2016-12-16 - Publisher: Del Rey
NEW YORK TIMES BESTSELLER • Go beyond the film with a novelization featuring new scenes and expanded material. As the shadows of the Empire loom ever larger across the galaxy, so do deeply troubling rumors. The Rebellion has learned of a sinister Imperial plot to bring entire worlds to their

Authors: Elaine Cunningham
Categories: Fiction
Type: BOOK - Published: 2012-10-31 - Publisher: Random House
Following intense personal loss, Jaina Solo descends to the dark side, determined to take her revenge on the Yuuzhan Vong. In the process, she learns something new about how to fight the alien invaders, but she must also remember that revenge is not the way of the Jedi - even