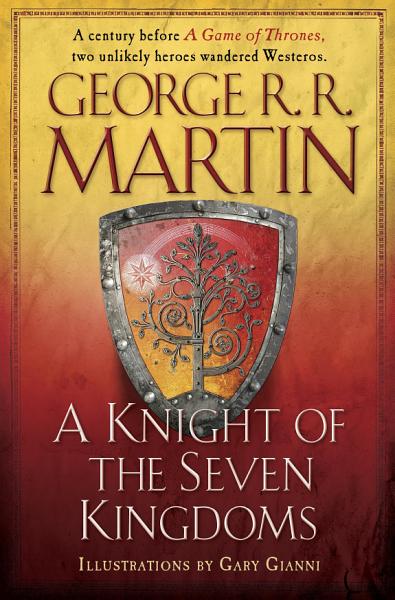 NEW YORK TIMES BESTSELLER • Taking place nearly a century before the events of A Game of Thrones, A Knight of the Seven Kingdoms compiles the first three official prequel novellas to George R. R. Martin’s ongoing masterwork, A Song of Ice and Fire. NAMED ONE OF THE BEST BOOKS OF THE YEAR BY LOS ANGELES TIMES AND BUZZFEED These never-before-collected adventures recount an age when the Targaryen line still holds the Iron Throne, and the memory of the last dragon has not yet passed from living consciousness. Before Tyrion Lannister and Podrick Payne, there was Dunk and Egg. A young, naïve but ultimately courageous hedge knight, Ser Duncan the Tall towers above his rivals—in stature if not experience. Tagging along is his diminutive squire, a boy called Egg—whose true name is hidden from all he and Dunk encounter. Though more improbable heroes may not be found in all of Westeros, great destinies lay ahead for these two . . . as do powerful foes, royal intrigue, and outrageous exploits. Featuring more than 160 all-new illustrations by Gary Gianni, A Knight of the Seven Kingdoms is a must-have collection that proves chivalry isn’t dead—yet. Praise for A Knight of the Seven Kingdoms “Readers who already love Martin and his ability to bring visceral human drama out of any story will be thrilled to find this trilogy brought together and injected with extra life.”—Booklist “The real reason to check out this collection is that it’s simply great storytelling. Martin crafts a living, breathing world in a way few authors can. . . . [Gianni’s illustrations] really bring the events of the novellas to life in beautiful fashion.”—Tech Times “Stirring . . . As Tolkien has his Silmarillion, so [George R. R.] Martin has this trilogy of foundational tales. They succeed on their own, but in addition, they succeed in making fans want more.”—Kirkus Reviews (starred review) “Pure fantasy adventure, with two of the most likable protagonists George R. R. Martin has ever penned.”—Bustle “A must-read for Martin’s legion of fans . . . a rousing prelude to [his] bestselling Song of Ice and Fire saga . . . rich in human drama and the colorful worldbuilding that distinguishes other books in the series.”—Publishers Weekly

A Knight of the Seven Kingdoms

The Mystery Knight: A Graphic Novel

Authors: George R. R. Martin
Categories: Comics & Graphic Novels
Type: BOOK - Published: 2017-08-08 - Publisher: Bantam
A graphic novel edition of The Mystery Knight, one of the thrilling Dunk and Egg novellas from George R. R. Martin’s A Knight of the Seven Kingdoms and a prequel of sorts to A Game of Thrones “Every wedding needs a singer, and every tourney needs a mystery knight.” Westeros

A Knight of the Seven Kingdoms: A Novel By George R. R. Martin | Conversation Starters

Authors: dailyBooks
Categories: Study Aids
Type: BOOK - Published: 2016-09-12 - Publisher:
A Knight of the Seven Kingdoms by George R. R. Martin | Conversation Starters A Brief Look Inside: EVERY GOOD BOOK CONTAINS A WORLD FAR DEEPER than the surface of its pages. The characters and their world come alive, and the characters and its world still live on. Conversation Starters

A Knight of the Seven Kingdoms